Welcome to the Piedmont Subdivision of the Chesapeake and Ohio Railway. The Piedmont Sub began in Richmond and extended west to Charlottesville through Hanover, Louisa, Orange, and Albemarle Counties. Throughout much of its life the Piedmont Sub was primarily a passenger line and the C&O’s finest passenger trains - The George Washington, the Fast Flying Virginian, and the Sportsman - polished the rails of the Piedmont Sub. The line did, however, generate some rural agricultural traffic.

This site is an unofficial railfan site and is not affiliated with the Chesapeake and Ohio Railway or any of its successors.

The Piedmont Sub began in Richmond’s 17th Street Yard, a little north and west of Main Street Station. From there, it headed north, roughly parallel to the RF&P. Eventually the line turned west, crossing the RF&P at Doswell. It then headed west and slightly north through Mineral and Louisa to Gordonsville. The line in this area was mostly single track and ran through lands forested with a mix of deciduous and evergreen trees. Gordonsville was the junction with the C&O’s Washington Sub. Past Gordonsville, the line ran south and west through Lindsay and Keswick. The Piedmont Sub ended in Charlottesville (but see here), where the C&O’s name trains had their consists shifted for the run over the Mountain Sub.

The Piedmont Sub was the oldest section of the C&O: it was chartered as the Louisa Railroad in 1836. This site is intended to chronicle the history and development of the Piedmont Sub. If you have information or photos you would be willing to share, please contact me at the address listed below. If I can collect sufficient information, I’d eventually like to publish this material in book form. 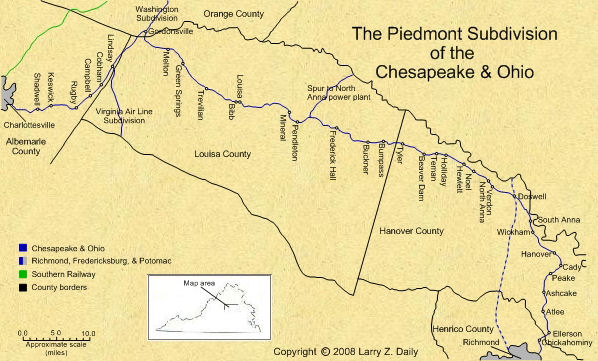 A word about the organization of this site is in order. I’ve included, in addition to this introductory page, pages on the history of the Sub, the references I used in researching the Sub, and links to other sites of interest. Also, there is a page devoted to each station along the Sub. I intend each of these pages to provide information about the relevant station, a map of the C&O at that station, and photos of C&O structures. Note that each page also includes the C&O milepost for that station. In 1882 the C&O began numbering mainline mileage at Fort Monroe on the Peninsula Subdivision. Richmond, the eastern end of the Piedmont Sub, was at milepost 85. Charlottesville, the western end, was at milepost 181. Finally, credit for donated photos is given where appropriate. Any uncredited photos are mine.

Each page in this site contains the menu for the entire site. There’s a link to the menu at the top of each page. Simply click it to be taken directly to the menu. The menu is simply a table of links to the other pages in the site. To access the page for a particular station, use the drop-down list below the menu. Scroll to the station that you’re interested in, select it and then click the “go to town” button.

I’ve tried to keep this site as simple as possible, without too many distracting doodads and thingamajigs. There are no Java applets or ActiveX controls. I have used a few Javascripts here and there to improve functionality, and the main Piedmont Sub map is an image map - you can click on a station to go to that station’s page. I hope you find something of interest on your visit here.

Gary Smith of the Buckingham Branch RR deserves special thanks for giving me an insider’s look at railroading on the Piedmont and for providing access to vast amounts of information on my last trip to the area.

Thomas W. Dixon, Jr. provided me with a great deal of information and photos from his private collection. I want to acknowledge his generosity here.

I’d like to especially acknowledge the contact I’ve had with a very special person - Mr. Charles Southworth. Mr. Southworth is one of three generations to work for the C&O in Central Virginia and he has been kind enough to share some of his memories of the Piedmont Sub with me. His information has been invaluable and his stories have made the people and places of the Piedmont much more real to me. Thanks, Pappy.

I’m constantly doing research on the Piedmont Sub, so keep checking back. Also, if you have any knowledge of the towns or industries along the Piedmont Sub, please feel free to share it. I’m also Looking for additional photos to publish.

You are visitor number

to this site since the new counter was inaugurated on June 28, 2004.
This site was originally established in 1997.

Please note that, due to a huge volume of spam coming in on my email account, I’ve had to change my email address. The new address is lzdaily@nospam.piedmontsub.com (but remove the nospam and the dot before piedmontsub.com).

All materials on this Web site are protected by United States copyright law. This includes, but is not limited to, articles and graphics. Unless otherwise indicated, these materials are the property of Larry Z. Daily and may not be used without prior written permission of Larry Z. Daily